If your lives are any similar, there’s been much to do in the recent past. I have merely works in progress to share with you this time ’round. I wish I had more.

Only part of the scene

FredStock! Here’s a black holed sun in space. Not going for fancy animation, but I want the pieces to look pretty. I have a little more than this drawn, but this makes a nice picture.

And this thing is coming along. I need to spend more time looking at it and tenderly giving it the attention it deserves. Though there are other priorities, I also can’t just rush through it. The point isn’t to just have a painting, you need to savor every moment of it. The results can be glorious, but you need to seep into every moment leading up to that climactic finish. Great things are built with great energy. Immerse yourself in your passion. 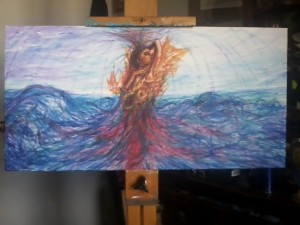 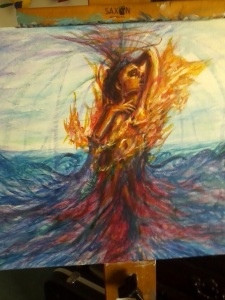 Now if you’ll excuse me, I have some things to do…

For that short animation, basically getting the events laid out. There’s a train, it flies into space. Flying records around (and other things). It lands on a giant guitar (strings as tracks), and stops at a station. People get up and start running down. There’s a black hole sun and a stage at the end. Famous dude gives a monolog. These folks suddenly lose interest in their alcoholism (we’re still in space, now). Then it all gets sucked into the black hole and it ends with a logo for the music show. 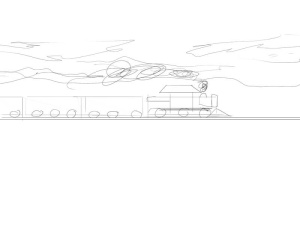 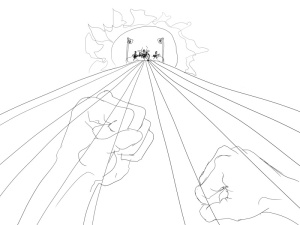 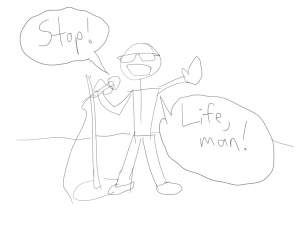 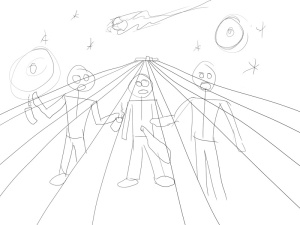 Added to that thing. 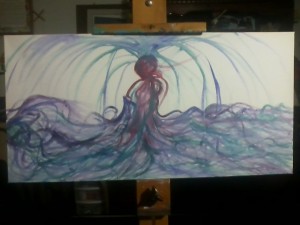 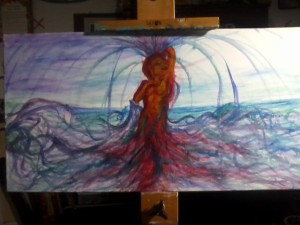 In other news, I recently agreed to help out some people back in Fredonia with a short animation with a train, a giant guitar, and outer space and cool stuff as an intro thing for the upcoming music festival. ‘Round 15-30 seconds. I’ll spill more as I make it.

Finally, I squeezed in some time to grind some chalk on that flat rock on the wall by the toilets. 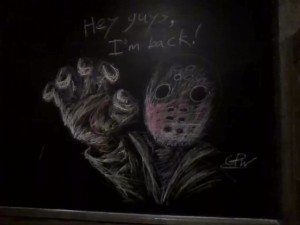 You cannot kill what refuses to die.

But you can ask it favors.

Had fun on a slow Tuesday morning. (Boss got new chalk. THE POTENTIAL….)

So there you have it, I can also do bubble letters.

I had paint that survived since the last painting, but I didn’t know what to paint, so I just painted that paint on a pre-painted white canvas and now it’s kind of a painting. Well, it is a painting, but it needs more paint. What a pane.

Totally been finessing some fantastic acoustic jams. Totally believe that I’m actually doing that. It’s totally worth the its time. I totally plan on totally recording each and every one, and they’re all totally absolutely completely fully written – mostly.

A couple character sketches for ya:

This is what I would look like if I turned into an evil Squidward demon. I think bad clarinet is the new metal and I can use the sound of my bad clarinet to paralyze the minds of the weak. It also might shoot lasers, but it’s certainly a sturdy club. This is for something, I’m not just a lunatic.

This is another major character in our budding kung fu cartoon. Harold is determined to reach the full potential of his powers, and takes his training very seriously, so he wears this outfit everywhere he goes. This nerd is such a badass.

I’m doing a lot of speculating on other kinds of projects I could do. While this new blog is a fun new thing I do, I might branch into the realm of video blogging. That way I can get my wordier thoughts out to people with my kind of attention span (while sewing in some laughs). As the saying goes, “Birds of a feather fly better than birds of fur.” It’s more aerodynamic.

I’m gradually building a web of websites to which you can find me. I already have my website GeorgeWagnerArt, my sort of town square where it shows every direction in the world of George you can go, and that will get periodic updates to be nicer every aspect I can figure. On there you can find links to my small Vimeo gallery of animations, this blog, and my soon to be more active SoundCloud page – alias Dendrex. I have a bunch of sweet music to start recording, the first of which being an acoustic album (just me and my twelve string guitar singing about dreams and stuff). I used to be an active nerdling on DeviantArt and Newgrounds as “Bit-Master,” both of which you’ll see a Sonic fanboy that got bored with that malarky (but for now these are the only places my old Sonic Shorts are). That transitioned into a (maybe) less exciting training period in college, where I learned stuff but didn’t produce much that I liked to look at. Being that I don’t want to keep that attitude in art for the rest of my life, I now wander around in speculation. A little history for that biographical novel you’re working on.

What does the world hold for the aimless wanderer?

Let us begin with a gander at my latest painting:

This is a remake of a now twice redone sketch from my early college days (the other two on Photoshop). You can see how the first remake doesn’t pack the same punch that the original rough sketch had, but I think I’ve finally done it justice.

I apologize for the long delay between posts. Gotta work on my rhythm.

Rhythm. It takes some to say it, or makes rhythm in saying it.

As we grow, our tastes develop. We find new details in things we like that thrill us more than what we looked for before. With music, I moved from overall sound (a production thing), to technicality (lots of notes), to texture (a way you layer the notes), and then added rhythm. The key to texture is the space between the notes – it changes how you hear them. Harmonic texture is what notes you play – is it pretty? gritty? Rhythmic texture is the pace and placement of those notes – is it smooth? rumbly? If there’s too much of the same texture, it flattens out – turns neutral – like white noise (and usually becomes boring). Doesn’t matter what flavor it is, you can only have so much pizza before it goes bland and you can hardly enjoy it anymore. Eat nothing but pizza for a month and you get a taste for why I’m so picky with music (or everything).

Half the reason I haven’t had anything to show recently is that I spend a good amount of time composing. I want some really dark, intense metal – without the flatness of screaming or whacking the guitar with a brick the entire time. I’m very technical, but I want to avoid sounding like a Bach enthusiast and just sweep and arpeggio for 40 minutes and call it an album. Being that I can’t even do that yet, I’m doing a pretty good job of it (pat on the back).

I have most of an acoustic album written, (aimed at having a metal tone) but that’s on hold for a bit while I’m gathering material for a real metal album. It’s much more fun right now. I even have some tasty lyrics in the works – that I will SING. I don’t want to program drums, but might have to for the demos. Though I also like industrial, so maybe I’ll work it in. Time will tell.

If you want to listen to two songs that are nothing like what I just described, here’s my SoundCloud page! (Dendrex) http://soundcloud.com/dendrex

I may start recording the finished acoustic pieces and get that album out of the way sooner than later. And as far as art, I want to dip into landscapes now and do some character designs, though little is certain at the moment. Time will tell, and I will tell you about it.

Thanks to each and every one of you. I love puking, so much that I bought puking a card for Valentine’s Day. Somehow it got covered with feces.

The cool part’s over. Now we’re starting our regular shop routine. From here on the place is basically the same, but you’ll see a gradual change in the stuff I have here (until the owner makes a drastic slip and the business is crippled from the ankles up). At least I could wiggle my toes whenever I’m bored.

I wish not to spill too much detail right away, but a couple friends I met in college have been writing for a show about kung fu and comedy, but it goes a lot deeper than that. There will be dialog with much punnery (a made up word for lots of punitude, which is also a word I made up, as you could tell by the fact that they’re not real words) and fight scenes. I gathered a couple local friends for the animation team, and that’s as far as it’s gone so far… We have a number of main characters, but I finally sat down to do rough sketches of three of them (subject to change). There is no correlation between myself and that one character that may look like me. 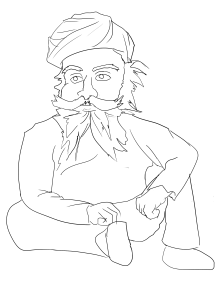 Okay, so maybe my beard does frame my beautiful, round face while I’m rocking a turban. Gotta have good looking characters for your show.

Just starting the outline for a new painting. Deciding to remake an old favorite drawing (again), hopefully this time really grasping the intensity I was aiming for.

Touched up “The Omen.” The apocalypse scene is clearer and the hand is more defined.

Here’s the old version for comparison. 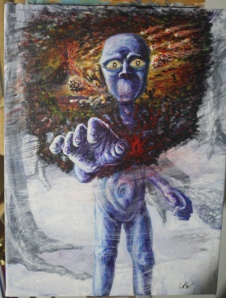 That’s cool ‘n all, but something new to see would be fun, rye?

I happen to be a busboy at The Corner Pub in Flanders, and The Corner Pub happens to have a chalkboard in the bathroom – AND CHALK! So here’s a good sample of what some guys have been peeing to lately. 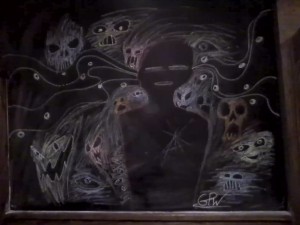 There came a point where people would draw phalluses with their finger or write obscenities, and my boss would be inclined to erase it. Or it would just get erased because reasons. I figured “Maybe a wall of demons isn’t everyone’s cup of tea…” So I tried to compromise and make friendlier pictures. Note- tried.

Good effort, I thought. But some got erased the next day anyway, so I started to not care again.

A little note for your future biography of me – these chalk drawings showed me how simple it is to make a whole picture with just a few colors and varying intensity. This eventually led to finally trying out full paintings.

To celebrate my first blog post, here’re my recent paintings:

This second one may still be drying as I’m writing this post.

I plan on using this blog to show some artwork, doodles, talk about convoluted theories, occasionally spill some dirt on upcoming projects, etc. Well timed with the start of this blog is my newfound interest in painting, and it’s been a blast so far.

I was most motivated after discovering the work of Zdzislaw Beksinski. He has a way of getting under your skin with an elegant atmosphere. So deliciously hellish. Check it out.

That’s all for now.